How to choose between an iOS or an Android app for your product? 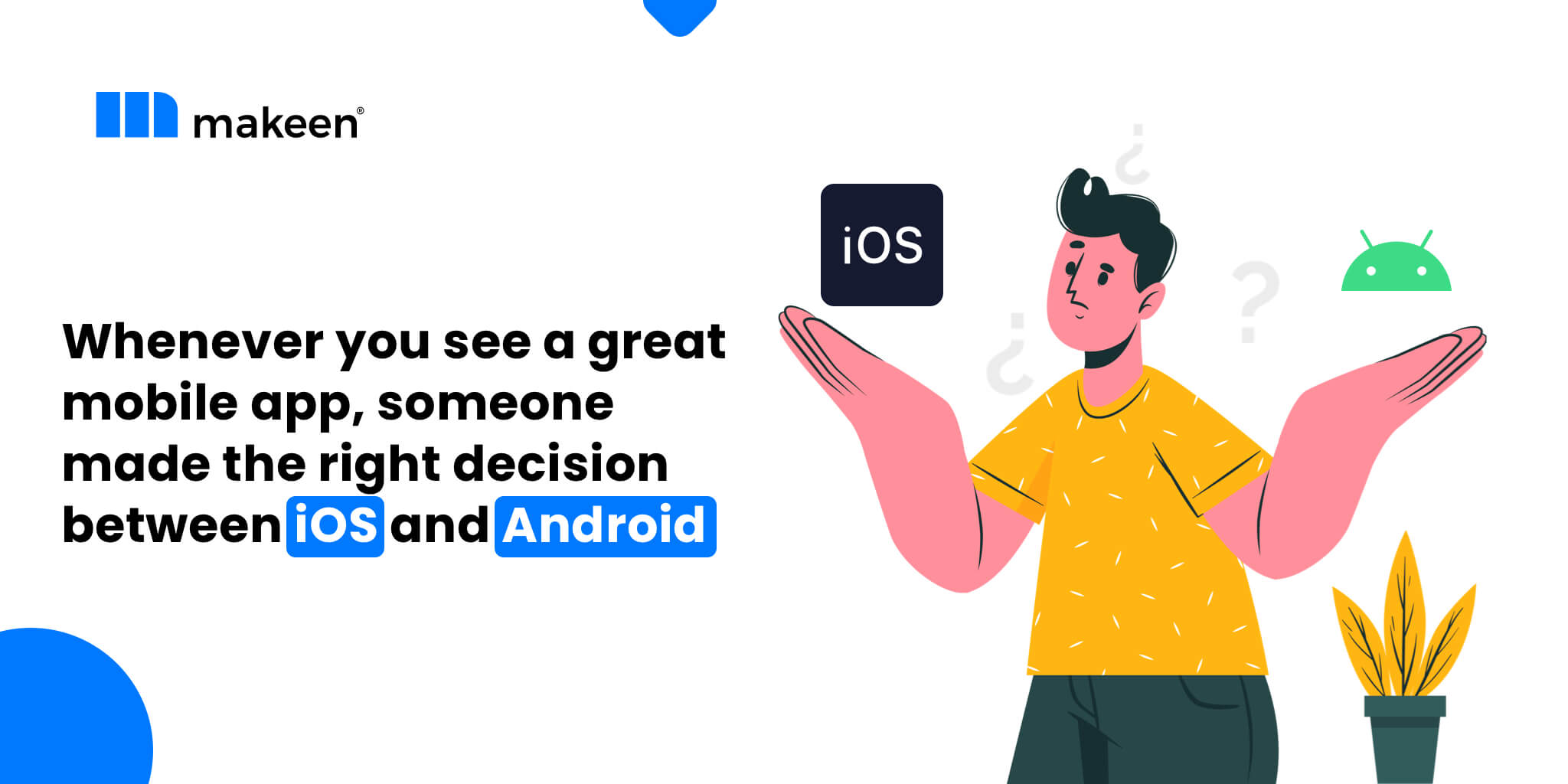 It is a simple to state strategic question but with a great number of impactful consequences especially in the early life of a product. You get it wrong and your product might not even see the daylight, or even if it does it might not live long enough in the hands of the users.

Why is this decision so crucial?

To understand why it is so, let’s first ask a few basic questions.

If the answer to the above questions is “we don’t know” and “not necessarily”, respectively – stop! You need to go back and first do some serious user research and validate your product assumptions first and to get the basic groundwork done for the user experience of your upcoming app.

On the other hand, if the answer to the above questions are “Yes we have a good idea of our users based on the several tons of hours of talking to our users” and “yes, a smartphone app could be a great solution to the problem we are trying to solve” – then go ahead to read further.

Another question that is specially relevant for startups launching their product for the first time is – why first a native app? Several reasonably good hybrid app development frameworks exist that would spit out an Android and an iOS app through a common codebase. In addition, a hybrid app could be significantly cost effective.

As a result, the product team or the founders must answer this question with thoroughness as to why a native app is the best way forward. Some scenarios in which it makes sense to build a native app are:

If both the sets of questions above have been answered positively, then this article is for you.

If we agree that your users are smartphone-rs and that they would very much appreciate a native app working solution on their smartphones for the problem your product idea is addressing, then as a product leader (a co-founder of a startup or a product person at a company) one could use the basic, yet significantly consequential, metrics to work out your decision tree and compute a reliable outcome. Let us present those in the following.

Firstly, we should recognize that in almost all successful businesses today, it is not a choice between either an iOS or an Android app (as if one has to only choose one out of the two) but rather which platform to use first to reach your users effectively. The order of mobile platforms for app development is what matters, as every significant business will have to eventually build their services on both the platforms to cater to all possible users.

What mobile platform is the majority of early users on

This is a no brainer but could be extremely fundamental in deciding which mobile platform to build your app on. If the majority of early target users are on iOS or on Android, then by default it would make a lot of sense to build your app on that platform first and later expand to the other platform. This core data point is not only helpful in deciding whether one needs native app or not but in which order of platforms the native app could be built.

Positioning of the product

If your target users are more evenly divided, then one reason to decide for an iOS or the Android app for your product could be the understanding of how your product is positioned towards the users. Positioning could be broadly (but not encompassingly) classified into the following categories:

It is no secret that iOS is home to several high end premium apps/services. And if your product’s positioning is premium then it makes a lot of sense to start first with the iOS app development for your product to reach out to premium customers. Similarly, if your app is positioned for all income earners, example of which is an e-commerce service then the decision to first go for an Android app first could be a well founded one in order to reach as many customers as possible.

For early stage startups, getting speed and cost of getting the product into the hands of the customers is super important. iOS apps tend to be more expensive but significantly faster to develop. Therefore for a startup that is tight on deadlines, it might make sense to consider going first for the iOS app in order to fail fast and get feedback from users.

Let us briefly discuss some pros and cons of iOS and Android app development. Most of it might appear to be common knowledge but the trick is how to use this knowledge to effectively make a decision for your product strategy that leads to a success.

Say you have decided to either go first for an iOS app or an Android app and as we have seen that it will most likely have deep impactful consequences, how do you then de-risk this decision?

Well, in this case de-risking means being able to pivot quickly and without killing the project from the older strategy to a newer one. The following two ways could help de-risk the decision.

The decision to create an iOS or an Android app depends on your target market and several factors related to your project that must be carefully considered by the product leaders or founders before making the decision. What is important is that even though details of each project are unique to itself, the broad rules that we have presented could be used to make a sound first analysis in effectively building your decision tree.

As a rule of thumb, and by no means it is applicable in all situations, if one wants to launch an app as a MVP with tight deadlines, the iOS app may be the way to go. However, in case you have positioned your product for the middle and all income earners then launching an Android app could be a reasonable option vs the iOS app.

These are the kind of questions we at Makeen help resolve for a variety of our clients in order to help them build and bring their products to their users. We have helped our customers identify potential use cases and then decide to go for either an iOS or an Android app based on the requirements. If you would like to bring your idea in the hands of your users, come and talk to us to know your next steps and get your product into the hands of your users fast.

Best ways to find a name for your startup

You wake up one fine day, with a phenomenal business idea, an exceptional product or service to take the world by storm, sipping into...

Want to know why Svelte should be your choice of framework for your products?

Even today, there are many developers who have not heard of Svelte. Surprisingly, one finds that the uninitiated lie on both ends of the...

How to Make Your Digital Products Better: Tips and Best Practices

The soul of a digital product is the brand DNA and personality implemented in design patterns that guide and support users on each path...