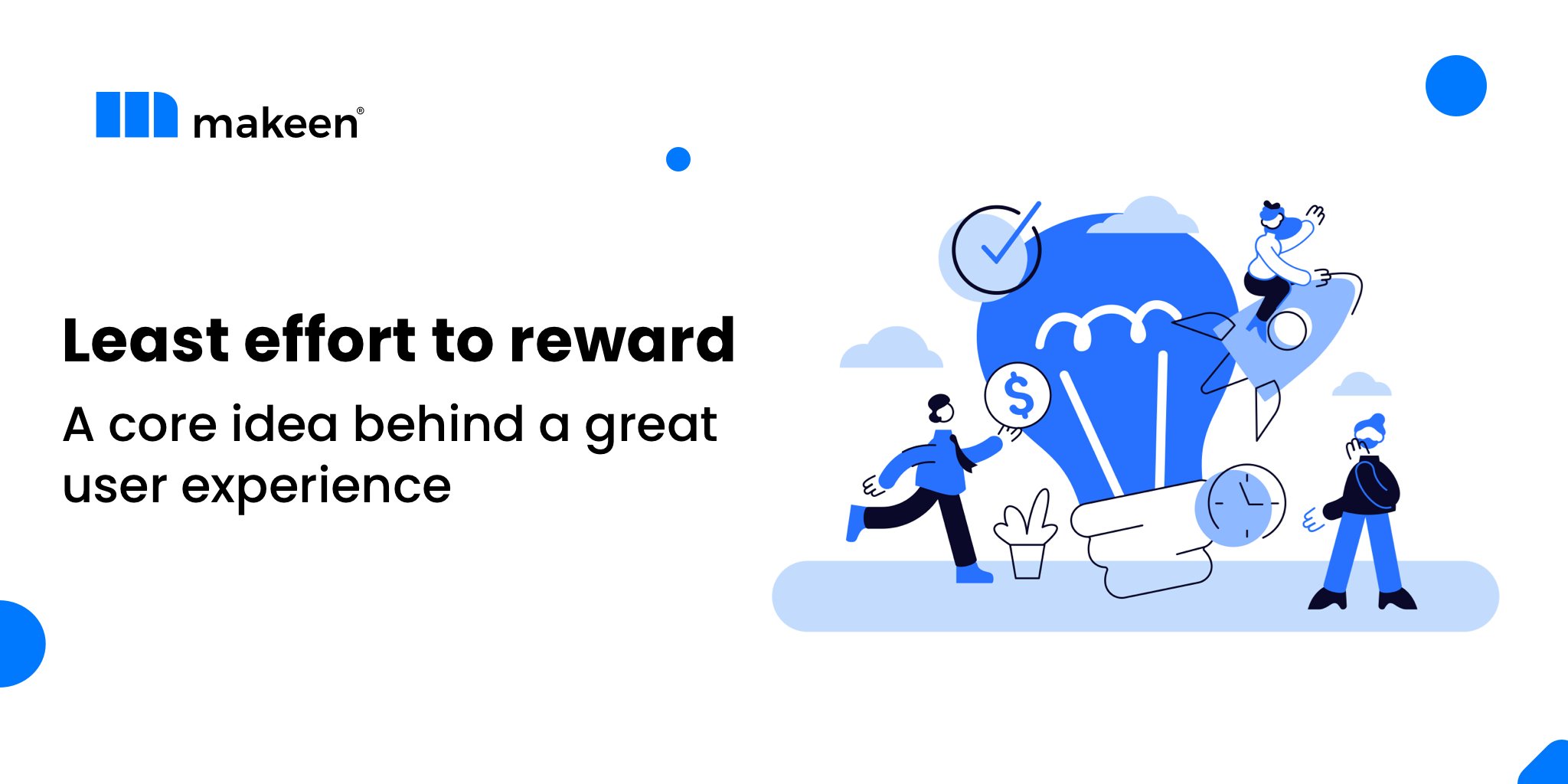 In this letter, we explore a central concept that is integral to any great user experience or product design in general, i.e., the concept of least effort to reward. Humans are energy conserving machines, we don’t like to expend energy unnecessarily, especially when we are chasing a goal. The shortest path, or the cheapest path in terms of energy or time, the goal is usually what we like to take.

In fact, if you truly dig deeper, it is not the goal but the feelings associated with achievement or satisfaction are what we are chasing. These feelings are quite addictive. In practice, mind scientists (psychologists) refer to it as a dopamine hit.

Now imagine that a user wants to accomplish a task using an app. The law of least effort to reward dictates that the design that will offer a great experience to the user must pass the test of simplicity and should require the least amount of time/effort to accomplish the task. Why is it so? Well, as mentioned above, humans are energy-saving animals and we like to get to our goals (or rather the feeling of accomplishment or satisfaction in this case) by spending the least amount of energy on it.

Let us explore this idea further with two special cases of this fundamental principle that has the potential to make the product design so good that it results in a great user experience.

We understand by now that humans fundamentally like to conserve energy. Think of them as being efficient instead of being lazy, if that makes for a more positive note. If a task involves a series of actions that takes more time to accomplish than the user’s perception of the value of its reward – it will be avoided unless absolutely necessary. For example, if I offer you a deal, that if you carry 5 Kgs of weight for a kilometer and you will be rewarded with 25 dollars vs if you do nothing and sit for an hour and you will be rewarded with 10 dollars. Which one would you take? My guess is that most of the people will sit and do nothing for an hour to gain 10 dollars compared to the former option of the deal. This is because these people intuitively figured out that sitting and doing nothing for an hour is the least effort to earn a dollar per unit of energy spent.

Similarly, there is a reason why API integrations are a standard feature of every SaaS product today. This is due to the fact that users don’t want to switch apps, login, perform an action, and logout all the time between several apps. This not only complicates the task they are trying to accomplish and also increases the risk of things going wrong midway. They want to be able to perform any action within a current app without leaving it, and then continue with the trail of intended actions to accomplish the task with the least amount of deviation.

This gains more relevance specifically in professional environments.  Employees want to accomplish the task at hand, this is what gives the mind the feeling of satisfaction or fulfillment with respect to the task. But to reach this feeling, they want to do the least effort not only because they want to save their employers time and ultimately save costs, in fact, this is secondary, they primarily do it because it is deeply ingrained in their brains through the evolution of several hundred thousand years to conserve energy, i.e., hence the law of least effort to reward.

Consequently, an app designed to optimize effort (or time) to satisfaction should result in the least effort and therefore in the optimal design leading towards a great user experience. User journeys solving the user’s pain point must involve features that are simple and provide an easy and direct route to the next stage until the journey is accomplished whole. As simple and intuitive as this principle is, more often than not, product managers and designers fumble on it, as it is so much easier to want to sell more than to buy less. Even experienced designers and product managers cannot help themselves but add more features in an effort to make the stay of the user delightful. But it is the surprisingly easy and fast design that delights the user more.

Essentially, the path of least effort to satisfaction cannot contain distractive features, which also implies not having redundant features, and should involve fewer stages than the user would normally expect. Distractions create stress like feelings and require mental energy to sort them out, which the user is naturally wired to avoid while expecting to accomplish a task. In addition, they could easily become energy wastages. By keeping the user’s focus on getting the task done we not only conserve her energy but also help her slide through the feeling of satisfaction with ease.

The following example and the figure attempts to capture this idea. Assume that a user journey has only three stages where a stage could simply be a webpage or a screen consisting of information along with some call to actions. Let the level of focus of the user be represented by the radius of the circle such that the smaller the circle, the user is more focused. What the principle of least effort to satisfaction tells us is that we want to keep the number of stages as minimal as possible while keeping the circle of focus as small as possible. This means the user’s focus on the end goal is high at every stage. Conversely, keeping a higher user focus naturally implies that the design must consist of the least amount of features needed per stage to accomplish the task. Similarly, keeping a high user focus for a long time implies that the design must only involve a few stages before the user starts to get either frustrated or tired. 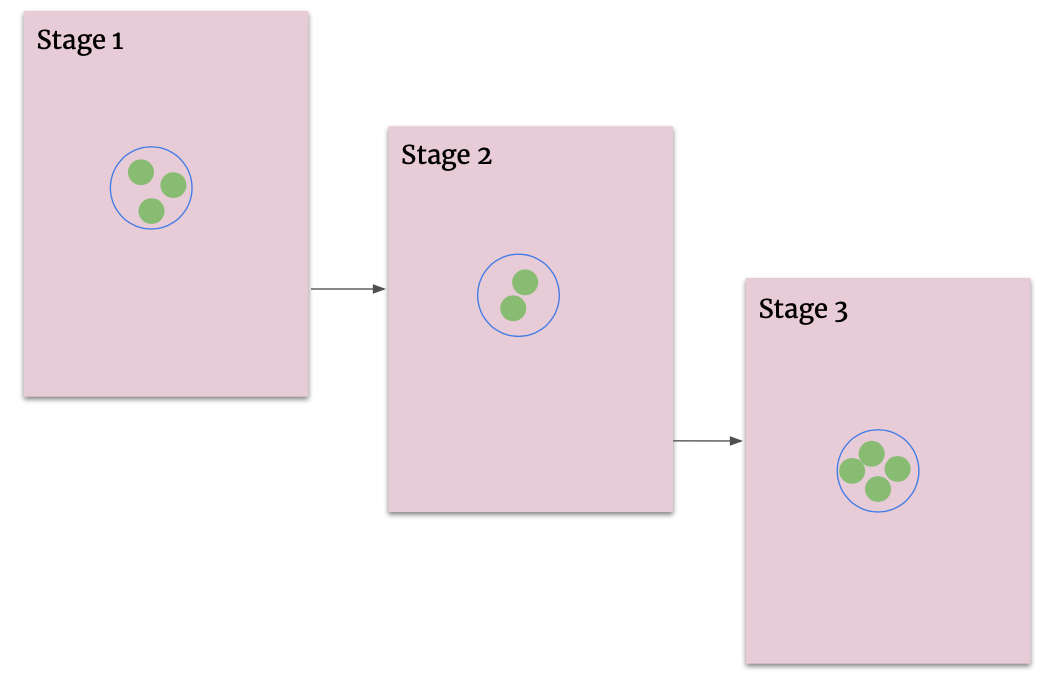 In the figure, the designer has designed the stages to limit the spread of attention of the user to at most only 4 features per stage of the user journey. More informed designers use scoping, central vs peripheral, to limit the number of features per page and organize them in a way that keeps the user focused by allowing only necessary distractions, if any. The idea of scoping comes from the observation that the human vision has evolved to divide the input from the environment in two ways, central – which are the objects within the focus, and peripheral – which are the objects not in core focus but within the spread of the vision.

The following quotation commonly attributed to Albert Einstein captures it well – “Everything should be made as simple as possible, but not simpler”, or if you are open to consider my version of it – “Focus on essentials and only add if it makes it simpler”.

While humans are naturally wired to save energy, we are also naturally wired capable of going to extraordinary lengths to achieve states of ecstasy. You might ask, but then how does it add up with the idea of least effort? Well, if the perception of the value of the reward is maintained high for a short enough time, our minds interpret it as an incentive to put in more and more effort in order to achieve it. (And before we know it, we are chasing the reward, or speaking in the language of chemistry – chasing the release of dopamine in our brain.) 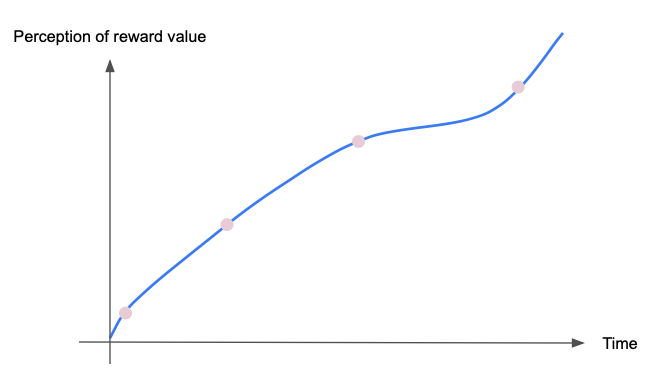 In order to drive the point home, let us consider the two cases above of the principle of least effort illustrated intuitively with pictures.

The least effort to satisfaction is like chasing a series of periodic tasks of a similar nature. For example, imagine the task of writing an email. All emails involve almost the same actions to accomplish the successful sending of the email, which could be entering the correct recipient, subject, add attachments (if needed), and message in the body. Then the job of an accomplished designer is to design the user experience of the email client in such a way that there is minimum variation in the process of writing one email to another while maintaining the least effort to satisfaction per email. If the design is done nicely, it will reward the user enough times to spend more and more time with the emails in a single go.

On the other hand, the least effort to ecstasy is more generic and could be thought of as going from one mountain peak of ecstasy to another, where the scenic view from the top is the reward and the climb to the mountaintop is the effort the user puts in to get the reward. 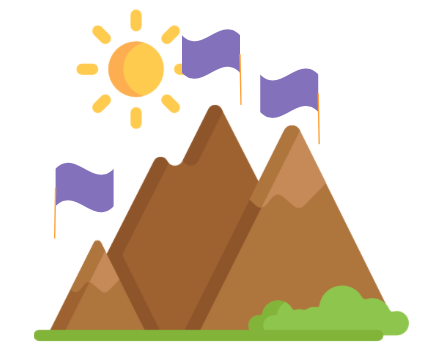 For example, consider the Facebook or Twitter timeline. As the user scrolls through the timeline, each display of content that is ranked and put in the timeline for the user consists of several potential call-to-actions that are all fighting for the user’s attention such as shares, likes, and several other reactions. Each call-to-action could take the user through a separate journey, as far as the user is being rewarded high and quick enough. In fact, the more quickly and often the user can be rewarded in terms of her social or professional values, the longer she will tend to use the timeline.

Get in touch with us

We from Makeen have made a sincere attempt to provide you with the best practices that we have learned from our experiences and the best philosophies we believe in. At the same time, we would love to hear from you, whether critical or commendable – we welcome your feedback.

Here at Makeen, we are on a mission to create curated and unique content that aims to address several topics relevant to the startup community. We believe in not only helping you at a point in time but developing a relationship that supports your journey throughout.

App development should not happen in the dark. Data-driven design is crucial to getting it right when developing apps that exceed customer expectations and...

Artificial Intelligence (AI) was once an intimidating topic that conjured images of robots overtaking offices. But the reality is that AI is being used...

How to Save Big by Outsourcing Software Development During a Recession

Recessions place immense strain on companies, forcing them to trim budgets and make the tough decisions on which activities and projects to prioritize. During...